Combined Cycle Journal recently published an article on turbine lube oil varnish written by Peter Dufresne Jr. and his team at EPT. We’ve divided the article into four blogs to make it easier to digest -- click here to find parts one, two and three. 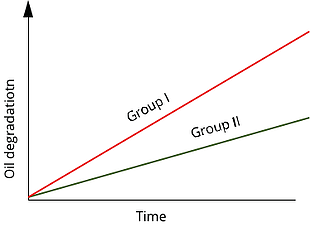 Most modern turbine lubricants are made with API (American Petroleum Institute) Group II mineral-oil base stocks, which contain an antioxidant additive package. The chemistry of Group II base stocks makes them more oxidatively stable than the traditional Group I base stocks that they generally have replaced in turbine-oil applications.

Antioxidants usually are added to the lubricant as a built-in varnish mitigation strategy. These additives generally are comprised of two classes of chemicals: phenols and amines. Although both have antioxidant activity on their own, they function more efficiently in concert with one another.

While the specific identities and amounts of the antioxidants employed with different lubricant formulations, the mechanism by which they enhance fluid lifetime remains the same. 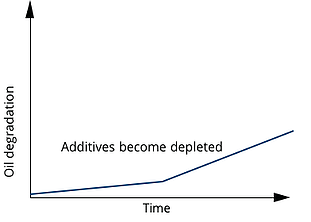 These chemical additives are sacrificial and will oxidize more readily than the lube-oil base stock. As a result, the oxidation rate of the oil itself is decreased, while antioxidants are present. Unfortunately, both phenols and amines become consumed as they oxidize; the phenols tend to deplete more quickly.

Once the additives are consumed, the rate of fluid degradation accelerates, returning to that of the - base stock. Antioxidants limit the rate of oxidative degradation and, therefore, delay varnishing, but they cannot prevent it.

Since antioxidant levels deplete continuously, it is important to monitor them to ensure that your lubricant is protected from excessive degradation.

Methods for monitoring additive depletion include voltammetry (RULER testing ASTM 6971), Fourier infrared (FTIR) spectroscopy, and high-pressure liquid chromatography (HPLC). Regardless of the monitoring method employed, the fluid should be replaced when all antioxidant additives have been consumed.

While the antioxidant additives included in most turbine-oil formulations are an essential tool in the fight against varnish, as noted above, they can only limit oxidative degradation, not prevent it. When the lubricant inevitably oxidizes and varnish precursors are formed, varnish removal systems are necessary to prevent degradation products from accumulating to the point where varnishing occurs.

Depth filtration, Balanced Charge Agglomeration™, electrostatic oil cleaning, or combinations of these techniques are advanced forms of particulate removal. These techniques remove fine particulates that are suspended within the fluid, including insoluble varnish particles. As particulate removal technologies, these systems must wait for insoluble varnish particles to form before they can be of value.

Since solvency decreases at lower temperatures (favoring the formation of ), the maximum benefit obtained using these systems is achieved when the turbine is not operating and the lubricant is at ambient temperatures. Suspended particle removal systems are, therefore, more use when employed periodically, during outages; they are less effective when used continuously during turbine operation. When used in the manner described above, these systems are incapable of removing soluble varnish and its precursors.

In an effort to overcome this limitation and enable continuous use, oil coolers can be used on the inlets of these systems to accelerate the varnish formation cycle and precipitate from the lubricant immediately before it passes through the varnish removal system. This form of varnish removal is referred to as “temperature-induced varnish removal.”

However, the magnitude by which the oil can be cooled is limited: Cool oil is more viscous and difficult to pass through the particle removal systems. Because of this limitation, the oil cannot be cooled to the temperatures required for complete removal of all of the soluble varnish present. Result: The lubricant’s solvency is never improved to the point where varnish deposits already present elsewhere in the system can be re-dissolved into the fluid.

Moreover, the soluble varnish and soluble varnish precursors, which cannot be removed from the fluid, return to the turbine where they may plate out on metal surfaces. As more varnish is deposited, the lubricant becomes perpetually saturated and further varnish removal is impaired. As varnish continues to build up, the suspended particle removal system often will be unable to keep up.

Conventional ion-exchange resins function by exchanging one chemical for another. Unlike these resins, which exchange one contaminant for another, ICB resins are engineered to the entire contaminant without returning any others to the fluid. A key benefit of the ICB adsorption principle is that harmful oxidation products can be removed at any operating temperature, meaning that SVR systems can be used continuously. The continuous removal of soluble varnish and its precursors ensures that degradation products do not accumulate in the lubricant, eliminating the risk of varnish formation during normal turbine shut down cycles. Moreover, the continuous removal of soluble varnish produces a lubricant with extremely high solvency. 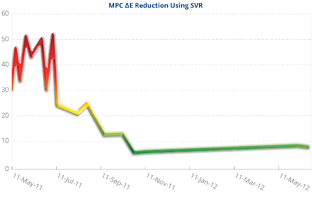 The graph to the right illustrates the usual trend in MPC values for one year following the installation of an SVR system. There are two distinct phases in this example. The first is the “restoration” or “clean-up” phase. The second is the “stability phase.”

As SVR treatment is initiated and the restoration phase begins, the MPC value increases initially. For many users, an initial increase in the fluid’s varnish potential following the installation of an SVR is concerning; however, such an increase is typical and, indeed, demonstrates that the SVR is accomplishing its goal.

As previously insoluble varnish deposits are cleaned by the lubricant, which now has the solvency required to return them to the soluble state, the level of soluble varnish increases resulting in higher MPC measurements. This restoration phase typically lasts for three or four months, but longer durations are possible, depending upon the level of contamination present.

When a system is relatively clean and contains few or no varnish deposits, the fluid’s varnish potential begins to drop immediately following SVR use. Once MPC values decrease below 10, the lubricant enters the stability phase. In this state, the oil contains minimal levels of oxidation products/varnish precursors and has a high solvency.

Turbine operation under these conditions is ideal, as the high lubricant solvency and low concentrations of soluble varnish precursors prevent varnish from forming under the variable operating temperature and pressures conditions employed in most turbines.

Normally, once fluid solvency has been increased (by removing soluble varnish at normal operating temperature), deposits will simply dissolve back into the fluid and be removed. However, when one lubricant is replaced by another type, it can impair the ability of deposits or remaining varnish particles to return to their soluble form.

An immediate oil change can, therefore, result in significant amounts of varnish being left on turbine surfaces. For this reason, old reservoirs should be cleaned prior to oil changes. The ICB process can be used to restore fluid solvency, allowing deposits created by the lubricant to return to their soluble form and be removed. In this manner, the reservoir can be cleaned and readied for new oil without ever having to drain it.