To understand the need for DFE, it is important to understand how filters are currently tested and validated. Manufacturers use the industry standard ISO16889 multi-pass test to rate filter efficiency and dirt-holding capacity of filter elements under ideal lab conditions. 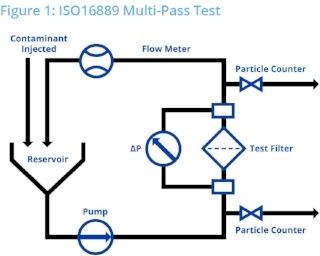 Figure 1 depicts the test circuit where hydraulic fluid is circulated at a constant flow rate in a closed-loop system with on-line particle counters before and after the test filter. Contaminated fluid is added to the system at a constant rate. Small amounts of fluid are removed before and after the for particle counting to calculate the filter efficiency (capture). The capture efficiency is expressed as the Filtration Ratio (Beta) which is the relationship between the number of particles greater than and equal to a specified size (Xμ[c]) counted before and after the filter. In real-world terms, this test is the equivalent of testing a filter in an off-line kidney loop rather than replicating an actual hydraulic or lube system. It’s basically a filter cart test.

DFE multi-pass testing method enhances the industry standard by inducing dynamic conditions (duty cycle) and measuring the effects of the duty cycle in real time instead of looking at normalized numbers over a time-weighted average. DFE also quantifies retention efficiency in real time in order to identify a filter’s ability to properly retain previously captured contaminant and the degree to which it unloads captured contaminant back into the system. For an easy comparison, think of it as a sneeze that releases a rush of contamination to levels that are well above the upper limit of fluid cleanliness then fades as the flow rate normalizes.

In the DFE test, the flow rate is truly dynamic in that rapid changes can be made while maintaining full system flow through the test filter. The raw data is continuously collected and organized so filter efficiency can be reported for variable flow conditions including time-weighted averages and isolated moments to reveal true filter performance during hydraulic stress conditions – exactly when you need the filter to perform at its best.

At the end of the initial test when the filter element is loaded with , it is subjected to a restart test in which the flow goes from zero to max flow in milliseconds, replicating a hydraulic or lube system restart. Through rapid particle counting with precise control, this dynamic flow change allows Hy-Pro to analyze the number of particles released and understand both the capture and retention efficiencies of each and every filter tested.

Join us next week to compare how elements perform in these different tests.