Last week we covered the differences between the ISO16889 Filter Test Procedure and the DFE Filter Test Procedure. This week we illustrate the difference between elements engineered to retain particles during dynamic flow conditions and those that are engineered only to pass the ISO16889 test. (Looking for previous posts? Find parts one, two and four.) 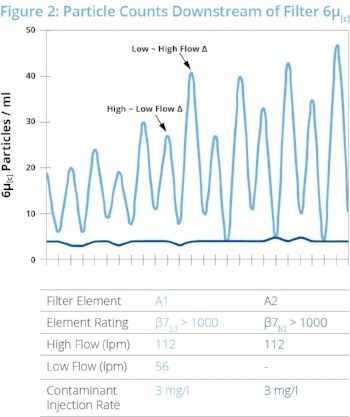 Figure 2 compares the performance of two identical high-efficiency glass media filter elements, one tested to ISO16889 multi-pass and the other to the DFE multi-pass method. The graph expresses the actual number of particles 6μ[c] and larger counted downstream of the filter element from several data points during the tests.

Filter A2 was tested at a constant flow rate and maintained a steady efficiency throughout the test. Filter A1 was cycled between max rated flow rate and half of flow with a duty cycle consistent with that of a hydraulic system. The downstream counts for Filter A1 varied and were highest during changes from low flow to high flow. 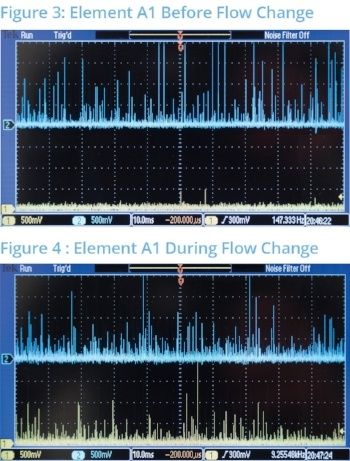 The downstream particle count trace during the change reveals a much higher quantity of smaller particles and larger particles that did not pass the element before the dynamic system condition.

This phenomenon can best be described as “contaminant unloading”. As the filter element captures more dirt, greater amounts may be released back into the system that it is installed to protect when the element is subjected to a dynamic flow condition and change in differential pressure across the element.

Unloading may also occur when the flow rate changes from high flow to low flow, represented by the alternating smaller peaks in Figure 3. The filter element typically recovers shortly after the dynamic condition, but highly contaminated clouds of fluid from contaminant unloading can cause severe component damage and unreliable system performance.

Although the contaminant unloading effect is still evident, the unloading is insignificant as filter element Hy-Pro 1, tested per DFE, performed true to its ISO16889 multi-pass rating of β7[c] > 1000 even during dynamic flow conditions.

Figure 6 compares the performance of filter Element A1 and Hy-Pro 1 (DFE rated). Both elements demonstrated excellent particle capture performance during the ISO16889 and DFE testing.

Stay tuned. Next week we'll conclude the series as we illustrate the difference between these elements when they're hit with a large surge of fluid during simulated cold start tests.